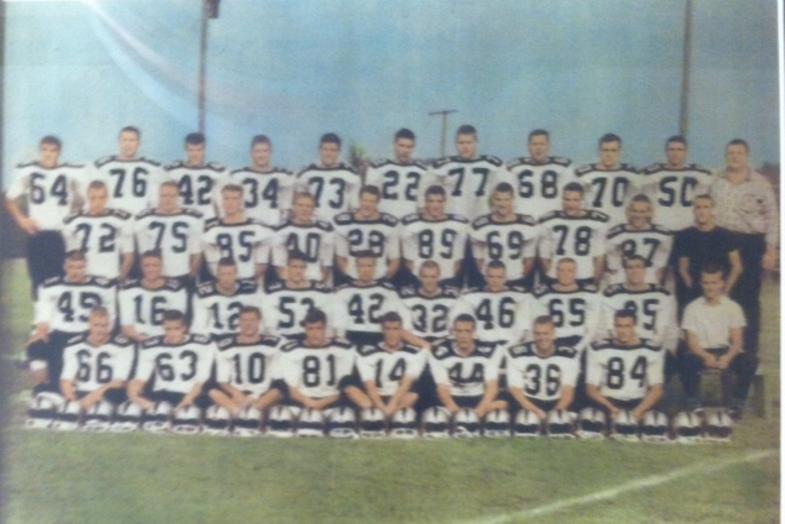 After losing out on a state title by a single vote two years before, the 1961 Bradley Central football squad captured its first state title, being voted No. 1 by both The Associated Press and Litkenhous Media, capping off the second- greatest four-year run in Bear gridiron history.
Leading up to the championship run, the Bears had gone 28-3, including a 21-game winning streak, in head coach Billy Frank Smith’s final three seasons. Smith left the cupboards full for incoming coach Harold “Red” Henslee’s first team, which went 9-1, losing only to McMinn
County in the season finale.

Smith was second in Bear history with a 75.5 winning percentage, going 35-6-2 in his first four seasons (1952-55), as well as 36-5 in his final three campaigns (1958-60). Overall, in nine years his teams were 71-21-2. After going 9-2 the previous year, the 1959 Bears went undefeated (10-0), the first unbeaten season for Bradley since the greatmrun of Coach Lee Pate’s pre-World War II teams in 1941 and 1942, who were 22-0-1 during those two years. The Bears also went 11-1 in 1940, giving them a streak of 32 straight games without a loss. The 1959 team was just as prolific and should have won the state title that season. But while the second-ranked Bears were closing out their unbeaten regular season and preparing for their bowl game with No. 8 rated Knox Young, top-ranked Dobyns-Bennett — which did not have a postseason game scheduled —was contacting all of the AP sportswriters, soliciting their votes to remain No. 1. When the final poll came out after Bradley had blanked Knox Young 13-0 in the Knoxville Optimist Bowl, the Indians claimed their 10th of a dozen state titles by a single point —213-212.

Game 1 — 08/31/1961 (Thursday) at Jimmy Lovell Field Bears 25, Tyner 0
With the Bears playing a game in August their offense started strong with William Senters racing 52 yards for a score and Steve Sloan carrying the pigskin 51 yards for his touchdown. Jerry Belcher added a five-yard run and track star Andy Ballinger carried 12 yards for his lone score. Harold Davis would add only one PAT before giving way to sophomore Jim Wilson for placement kicks. Bradley’s defense allowed Tyner to cross their own 40-yard line just once in the game. The Bears were ranked No. 2 in the state AP poll with mighty
Kingsport Dobyns-Bennett sitting on top.

Game 2 — 09/08/1961 at Jimmy Lovell Field Bears 45, Rhea Central 0
Senters continued his prolific season with three scores from 3, 24 and 20 yards out, while Ballinger tacked on a 30-yard score.
Sloan added a 1-yarder and Belcher got into the act with a 36- yard effort for a score. Unheralded Franklin Lemmons even dented the scoreboard with a 7-yard TD. Jim Wilson was now the man on PATs and he got off to a 3 of 7 start for the Bears.

Game 3 — 09/15/1961 in Knoxville Bears 25, Knox Young 0
The Bears picked up their third straight shutout with this one on the road for the first time this season. Belcher led the team with two
scores while Sloan and Senters each crossed the goal line as well. The Bears remained No. 2 in the rankings.

Game 4 — 09/22/1961 at Jimmy Lovell Field Bears 27, Oak Ridge 7
The fifth-ranked Oak Ridge Wildcats lost only two games during 1960 and 1961, both to the Bears with the 1960 loss their first at home in five seasons. Henslee’s staff of assistants included Bob Davis, Bill Walker and Rusty Clayton. These tough as nails, old-school coaches got
the best out of all their players even if it nearly killed them in the process. Bill Senters left his hospital bed to play in this game and was bed-
ridden again after the game. He wouldn’t score for the first time all season but the other Bears took up the slack with Sloan to ‘Doc’ Davis for a 20-yard score and Ballinger finding pay dirt from four yards out. Sloan and Belcher also ran for scores.

Game 5 — 09/29/1961 at Red Bank Bears 20, Red Bank 13
With the second-ranked Bears coming to town, over 6,000 fans bought tickets to the game at Rankin Field only to see the Bears come from behind to stay unbeaten. Andy Ballinger scored the go ahead touchdown in the fourth quarter from 25 yards out to secure the win. Earlier the Bears notched scores from Belcher and Senters while Jim Wilson converted two PATs. Bradley remained at No. 2 even though the top-ranked Indians of Dobyns-Bennett lost to No. 3 Chattanooga Central. The Purple Pounder win vaulted them over the Bears into the top spot, but the two rivals were set to square off the next week in the Bears’ Den.

Game 6 — 10/06/1961 at Jimmy Lovell Field No. 2 Bears 13 No. 1 Chattanooga Central 7
The Purple Pounders had traditionally been the biggest thorn in the side of the Bears throughout the years and this clash of two top
ranked teams in the state would set a record for attendance on Jimmy Lovell Field. Over 11,000 fans turned out for this gargantuan clash and the Bears didn’t disappoint the home fans. Ballinger and Sloan would score 6-yard and 2-yard touch- downs respectively as the Bears held off the mighty Pounders to claim the No.1 spot in the rankings for the first time in the season. The Bear defense allowed Central to cross the 50-yard line just once and that came in the closing two minutes when Central picked up their lone score.

Game 7 —10/13/1961 (Homecoming) at Jimmy Lovell Field No. 1 Bears 21 No. 1 McCallie 14
After knocking off the ranked public school teams of Central and Oak Ridge, the Bears now had to take on the No. 1 prep school in Tennessee. Against the Blue Tornado of McCallie on Friday the 13th Bradley prevailed in front of 7,000 fans. Doc’ Davis landed the first
score on a 15-yard pass from Sloan, while Jerry Belcher managed to score from two yards out. Larry Link hauled in a 23-yard aerial as well.
Wilson was true on all three PATs for the Bears. Sportswriters state wide were proclaiming the Bears as champs, but there were still three games left in the season.

Game 8 — 10/20/1961 at Chattanooga City Bears 39 Chattanooga City 6
The Dynamos were traditionally a powerhouse team that gave the Bears fits, but they were going through some tough times and
were no match for the Bear juggernaut they were about to encounter. Ballinger got things rolling with a 53-yard score while little known
Dennis Ruth hit the end zone with a 45-yard touchdown of his own. Sloan hooked up twice to ‘Doc’ for touchdowns with Ballinger
adding another score from 70 yards away. B.T. Henry even contributed with a short touchdown run. City threw a scare into the Bears on the last play of the first half. They snapped the ball and then pretended to start running off the field when the halftime horn sounded. The Bears, thinking the second quarter was over, started trotting off as well until Bear fans nearly panicked when they saw the Dynamo running back with the ball streaking for the end zone. He made it for nearly 80 yards before track star Andy Ballinger managed to drag him down inside the 5-yard line to prevent a score. It was the last laugh City would have in that game. After this win the Bears turned down a chance to play in the
prestigious Meninak Bowl on Dec. 2 in Jacksonville, Fla. “I don’t blame them one bit,” stated Coach Henslee, “they’ve played a lot of football this season and they’ve been hit harder and more than ever before and we’ve still got two games to go”.

Game 9 — 11/03/1961 at Vanderbilt University No. 1 Bears 32 No. 2 BGA 14
We were once again talking big- time football with the highly anticipated game between the Bears and Wildcats of Battle Ground Academy.
The Wildcats hadn’t tasted defeat in 27 games and were ranked No. 2, right behind the top-ranked Bears. It seemed like all of Nashville
turned out for the game which was moved to Vanderbilt’s Dudley Field to accommodate a crowd of over 14,000 fans. It is still the Bears’ all-time record for attendance at one of their games. College scouts galore along with the elite of country music settled in to watch in amazement as the Bears crushed BGA, 32-14. Andy Ballinger scored from 37 and 52 yards out with one of those scores coming in the first
two minutes, leaving the mid-Tennessee fans shaking their head at his speed. Jerry Belcher bulled in from three yards out while William
Senters sauntered to his touchdown from a longer distance of 33 yards. For good measure, All-State QB Steve Sloan tacked on another
touchdown from four yards out. The anticipated battle between Sloan and Duke Shackleford of BGA was a one-sided rout for the
Bears. The incredible defense of the Bears, as it had done all season, stopped the highly ranked offense of BGA in their tracks most of the
night.

Game 10 — 11/10/1961 in Athens McMinn County 20, Bears 6
Upsets are a part of life, about that there is no doubt. The Bears were primed to have that happen and their oldest foe was smelling blood in the water when the state’s top-ranked Bears ambled onto the reservation in Athens. Even with running back Jerry Belcher missing the game with a leg injury, the Bears were still heavy favorites. However, it was the McMinn County fans who would delight in bringing the Bears and their inflated egos back down to earth this night. Probably the biggest upset in McMinn history saw them take a bite out of the Bears that night, jumping out to a 13-0 lead at halftime. William Senters would break a 91-yard run in the third quarter but the Bears would get no clos-
er. The season was over for the Bears but second-ranked Oak Ridge still had a game with Knox Central the next week. This week’s poll found the Bears dropping to No. 2 after their staggering and unexplained loss to McMinn County while Oak Ridge had climbed the
mountain to stake claim to the top spot for the first time all season. But, upsets can level the playing field and the Wildcats found themselves in a fierce struggle with a game that ended in a 12-12 tie. By virtue of that tie and the fact that the Bears had pummeled the Wildcats, 27-7, earlier in the year, the Bradley was rewarded with the No. 1 spot and their first state title in football. The Bear football championship was the first leg of the “Triple Crown” of state titles to be won by the Black-and-Gold that school year as both the boys and girls basketball teams
claimed state crowns a few months later
​